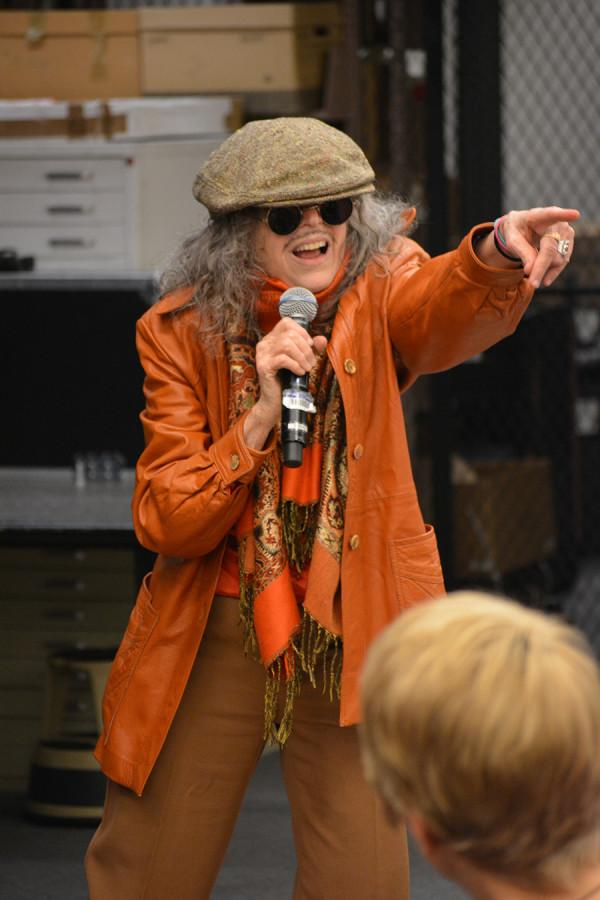 Hark Kanwal
Linda Montana puts on a performance art piece with music in the background, a baby bottle, and multiple facial expressions to make the crowd laugh.
Natalia Barr , Staff Writer
April 19, 2015
The panel discussion and performance “Linda Mary Montano: Living Art/Living Life” explored and celebrated a lifetime of art on April 14. NYU’s Fales Library commended Montano, a contemporary feminist performance artist, by opening her archives in the library. Panelists included Kathy Brew, Karen Finley and Linda Weintraub.
Montano has sought to dissolve the boundaries between art and life since the mid-1960s. One of her most notable works was “Handcuff,” a project in which she was physically tied to artist Tom Marioni for three days. The artist collaborated with Marioni again in “Tehching Hsieh’s One Year Performance” when the two were bound to each other by rope for an entire year. Montano also began “Seven Years of Living Art,” a performance based on the Chakras, in which she spent each year wearing a single color of clothing and spending part of each day in a colored room listening to a designated tone.
“It’s called alchemy,” Montano said. “You take two inert substances that aren’t making any sense, and you put them together, and you create gold.”
Emily King, a graduate fellow at Fales, compiled over 150 boxes of materials that represent 50 years of work into the newly completed archive.
“A lot of artists say that their art is separate from their life,” King said. “For Linda, I think something that makes it really meaningful is that there isn’t that separation and that a lot of times really meaningful art comes out of life experiences.”
While much of the attention in performance art has been and still is placed on male performers, King believes that the authenticity of Montano’s art draws people to the artist and her works.
“It really comes from a place that’s inward,” King said. “It gives another side of the story of women doing everything that a male performer can do and even more than that because they have the power and flexibility to push the envelope further.”
During the panel discussion, curator, artist, educator and author Linda Weintraub focused on “Dad Art,” a performance Montano gave after the death of her father. Weintraub emphasized how Montano’s time as primary caregiver for her father at the end of his life influenced her art.
“He wasn’t only a dad,” Weintraub said. “He was the subject of her art, the muse, the inspiration.”
Montano spoke of her training in San Francisco, a city that she believes is less patriarchal than those on the East Coast.
“The woman’s building was all really rock and roll and heavy duty,” said Montano, “We can have babies but we can also really change consciousness. Let’s change consciousness. Let’s meet once a month and change each other.”
The archive, which reflects the Montano’s lifetime efforts of creating art, will now be preserved at NYU’s Fales Library.
“Emily King has taken my whole life and has created a means of transportation through 50 years of my process in such a loving, careful, and diligent way,” Montano said, “I never had children and my art is my child. Emily King has been a doula, caregiver, and second mother in adopting my art as her child too.”
A version of this article appeared in the Monday, April 20 print edition. Email Natalia Barr at features@nyunews.com.

Posted by LINDA MARY MONTANO at 11:20 AM