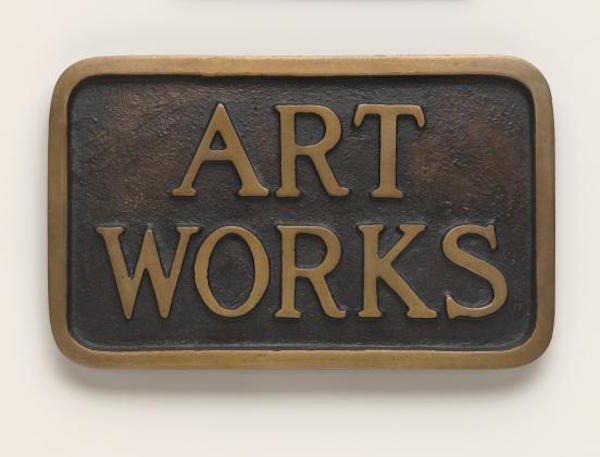 Stephen Kaltenbach, Art Works, 1968–2005, bronze, 4 7/8 x 7 7/8 x 5/8”. Photo: Benjamin Blackwell.
The University of California, Berkeley Art Museum and Pacific Film Archive (BAMPFA) was one of the first museums to focus on collecting Conceptual art. Since the 1960s, it has amassed works by Tom Marioni, Theresa Hak Kyung Cha, and Ant Farm, and this commitment has not waned since, as witnessed by the recent acquisition of dealer Steven Leiber’s collection. Constance Lewallen was instrumental in building Berkeley’s collection. As a curator at the institution for over three decades, she worked closely with many of the artists featured in “Mind over Matter,” a survey she recently organized of pieces by first-generation Conceptual artists within BAMPFA’s holdings. The exhibition, which she discusses here, is on view through December 23, 2016.
I CAME INTO THE ART WORLD during the seminal period of Conceptual art, which reflected the vast political and social changes taking place worldwide. In New York, working at the Bykert Gallery, I met artists like Michael Snow, Vito Acconci, Jan Dibbets. In Los Angeles I worked with artists who were connected to CalArts, including Jack Goldstein and Douglas Huebler; John Baldessari has continued to be a friend, and an inspiration. In 1980, I got a crash course in Bay Area Conceptual artists when I created a chronology for the catalogue for “Space/Time/Sound,” at SFMOMA.
With “Mind over Matter,” I wanted to emphasize that everything we’re seeing now in terms of “new” art internationally is derived from this early period. At the time, many people thought it was an endgame: “Where do you go from here?” But it turned out to be such an extremely fertile period. It was also a moment of innocence; I think people respond to this work because it’s not about commercialism, it’s not about money, it’s not about fame. It’s for artists to address their friends or each other, and there’s something so wonderful about that that’s really lost now.
Many Conceptual artists were interested in getting art into the world without announcing that it was art. Stephen Kaltenbach made bronze plaques bearing words—Art Works is the one I have in the show—that he intended to be buried in cement and unlabeled, so people wouldn’t necessarily know they were works of art. (He was also one of the first to place anonymous ads in Artforum, in 1968 and 1969.) Mail art, begun in earnest by Fluxus artists, was adopted by Conceptual artists as another new way of disseminating ideas—as were artists’ books.
When women come into the picture in the early ’70s on the wave of feminism, the body, which on the West Coast was already a new area of exploration, becomes very politicized (then came ACT UP and the Guerrilla Girls to illustrate that yes, art can effect political change). Carolee Schneemann’s iconic performance Interior Scroll is represented by a photograph of her pulling out a scroll from her vagina while delivering a monologue. At the time, men dismissed the piece, and many women thought she was exploiting herself—she got it from both sides. Now, she’s being recognized for her groundbreaking work. But it took a long time.
People often think Conceptual art is drily intellectual—that can be true, but it can also be humorous—and beautiful and emotional. In Mitchell’s Death, Linda Montano relates the story of her husband’s accidental death. You see only her face, eventually pierced with acupuncture needles; it’s the most emotional piece in the show. One ought not say “beautiful” in describing a work by John Cage because he wasn’t thinking about making beautiful art, nor were most Conceptual artists. Yet Cage’s Plexigram, which consists of several Plexiglas sheets bearing variously colored words and word fragments derived by chance from the dictionary—it’s complicated, as his work always is…but it really is beautiful.
I juxtaposed Jim Melchert’s film Untitled, in which an unclothed woman and man playfully throw buckets of water at each other, with the Relation in Space series Marina Abramović and Ulay performed in the 1976 Venice Biennale—again, it’s two naked figures, but their encounters become increasingly violent. Media Burn, a spectacular performance event Ant Farm enacted in 1975 at the Cow Palace in San Francisco, is a funny and sharp critique—a collision between two American icons, the car and the television. They made a video out of the performance: It’s not just a document, it’s a landmark early video piece. And of course there’s Baldessari, who has always used humor to great effect. At first he was dissed by East Coast artists because they thought, “Humor?—can’t be serious.” But of course it can be; I’ve included his well-known video where he takes different poses while announcing, “I’m making art.” It’s a commentary on the Nauman line, “Whatever I do in my studio is art.”

Posted by LINDA MARY MONTANO at 6:14 AM