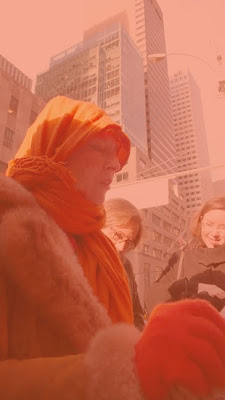 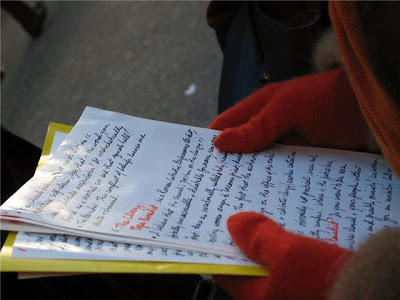 Dear Pope Benedict:
It is with a heart filled with contradictions and paradox that I address this letter to you. It is a letter of public admission of my position as a Catholic Performance Artist. The title is almost a contestable oxymoron. How can they both co-exist....the vocation to be a performance artist and loyalty to the Roman Catholic Church?This is mystery.

I was raised strict/conservative Roman Catholic in a village in upstate NY in the 40's,50's and even entered a convent leaving as a novice after 2 years. It is important and imperative that I mention here that the order of nuns was Maryknoll;probably the most forward thinking, liberal , human/activist yet Christo-centered and ecumenical religious order ever founded. And as an aside, it is also interesting to note that Maryknoll priest-activist Father Roy Bourgeoise, is currently facing possible excommunication from you for having attended a ceremony of priesthood for a Catholic woman, who is called to that vocation and recieved the sacrament of Holy Orders outside the traditional Church.

After the convent I left the church and practiced eastern theologies; finding answers, comfort ansd spiritually usefull techniques in their mystical/conmtemplative practices.
And at that time, as an artist, I was able to personally/aesthetically respond creatively to anything I considered unfair/unjust/unwise/inhuman, by making art that was religiously irreverant but comically convincing of my secular position.

Everything changed when I began a full-time university teaching job and my students cloned my thinking/permission; becoming as wild, free and spontaneous as I was. But I smelled trouble because there were instances when literally fire/blood/their traumas became the raw material for their art---material that I never feared for myself but when my art-children became conversant with possible danger,I ran for cover and accountability and teachings;back to the church. First the Newman center, then counseling with a Catholic therapist-priest, daily Mass and gradually I turned 360 degrees around, no longer the feminist, no longer laughing at the Church's stumblings and sins with irony and pain, no more spoofing its moral un-accountability, no longer undressing my body,mind or spirit in public and calling any of it ART.

Why am I here today? I come to the steps of your Church, Pope Benedict, with trembling. I have returned home full time : home to Holy Mass,and the Sacraments but I return as a new Catholic, not knowing how to compassionately address my concerns as a Roman Catholic Performance Artist. Here are a few things on my mind:

1. BIRTH CONTROL:
I personally believe that using birth control should be a free choice for all Catholics. Sexual intimacy is sacred and life-giving when practiced consensually and is an expression of love with or without birth-control.
The Church believes in sexual abstinence before marriage and in birth control after marriage;deamanding that Catholics use only the rhythm method, a method impossible for those unable to learn the subtitles of when to have sex, taking temperatures to see when it is safe, etc. And what about those couples who have compromised health issues:(AIDS/HIV/STD'S).Are we asking them to not wear condoms and literally kill each other when they make love?
The paradox: I see my belief and your values as equally applaudable and correct but yours as impractical and unreasonable for "real" people .

2. PRE-MARITAL SEX:
Pope Benedict: I beleive that pre-marital sex and pre-marital habitation are natural and necessary pre-requisites for a future happy relationship and sensible way to become acquainted.
The Church teaches that abstinence before marriage is the law.
The paradox: I see both values as wonderfull. I am aware of the beauty of obedient and sexual waiting ;waiting and then allowing the Power of the Sacrament of Marriage to become the sacred cement to keep 2 people loyal and committed to each other. What an ideal!
But I also value my belief that having sexual relationships outside of marriage can be very sacred as well.

3.GAY/LESBIAN LOVE:
Pope Benedcit, love is love and when 2 men or 2 women love each other, and even want to express that love in marriage, it is in my estimation natual and correct.
The Church believes that M/F marriage is the law and that law has been traditonally practiced so long and is biblically documented as theologically correct.
The Paradox: I see the beauty of my belief and I see the beauty of the Church's teaching.

5.THE CLERGY:
Pope Benedict, as a Roman Catholic Performance Artist, I beleive that the Church's position on the clergy is totally unreasonable and debatable for many reasons. First, there are vocationally called holy/ready/willing women eager to become priests, deaconesses, bishops and Popes.The fact that the hierarchy holds tight reigns on the office of the male priesthood and celibate clergy, another contentious issue, is obviously not practical, wise and is blantantly unfair. Where is the justice here, Pope Benedict? Do you want to continue to see more churches closed and your people without leadership and priestly ministry? We women are waiting for an invitation. Call us.
The Church believes that only non-gay males can hold the office of priesthood.
The Paradox: I remain silent and prayerfull and only hopefull that rules from Rome change in my lifetime and as a Performance Artist, I vow never again to address this issue with cynicism as I have done in the past. Now,bruised by age and doubt, I take the position of aesthetic/poetic, private admission of my own pain at MY inability to be more public about this outrageous injustice against women amd men who can not enter the priesthood if admittedly gay and must remain celibate once there.

6.DYING:
The end of a Catholic's life, like the end of anyone's life, is a totally mysterious journey, unique to the traveller.I believe that it should be as natural and when appropriate, unassisted by medical interventions as possible.Otherwise, family and caregivers are fraught with even more sorrow, remorse, shame,and protracted grief if hydration/tube feeding is not clearly explained. Who can/should/would/will do this teaching?
The Church is so very strict and cryptic about care at the endgame that the family is often confused. Why even the most astute and practiced moral theologians would find it difficult to make correct judgments at the bedside of some of the dying Catholics I have observed attempting to leave their bodies.
Pope Benedict:Help us. Don't tell us we are sinning or killing our loved ones unnecessarily because we opted for no more interventions.I beg you to create conventions;conferences where translators of the Church's teachings on death and dying can talk with us;symposiums with eschatologists/ethicists/moral theologians who can not only re-think/translate the Cathechism's interpretations of this issue but help all of us struggling to make holy, discerned decisions about tubes/plugs/water and then when the decisions are once made,help us forgive ourselves for what we have decided for we will be faced with the horror of loss and guilt at possibly having made a mistaken choice.Be with us, Church, don't judge us!
The Paradox:Dying Eskimo elders supposedly used to leave their community and walk onto a chunk of floating ice, to courageoulsy choose death.How foreign and un-Roman Catholic that sounds and , OH , how right!

I end this manifesto with a prayer:
HOLY SPIRIT, guide my brain and thinking. Help me to respect the needs and values of this Church that I have re-joined.The Church that allows my soul to sing. The Church which feeds my hunger for spiritual ecstasy. The Catholic Church which sacramentally forgives my egregious mistakes, sins , omissions. But most important of all, the Church of the Real EUCHARISTIC PRESENCE!! These aspects of the Church are my life and hope. They help me overlook all of the issues I raised in the body of this letter.
HOLY SPIRIT: Help me! I see this Church and it's hierarchy as a reluctant and isolated great, great great grandfather. Venerable yes, hearing? Not sure. Seeing the need for compromise and other Truths? I wonder.
HOLY SPIRIT, I ask for a spirit of rigorous yet prayerfull respect for my own individaul sacred conscience and my "fundamental option" to obey my halting ,yet seen as correct beliefs, based on what I think are my right and pure intentions .
HOLY SPIRIT, in a spirit of research and study and dialogue and obedience, I remain a student of Real Presence cloaked under the mantle of Mary's kindness.

AND NOW, BEOFRE I END THIS LETTER, I MUST TELL YOU POPE BENEDICT: I AM NOT DOING ANY OF THE ABOVE; I AM NOT "SINNING" IN THOSE WAYS. I AM NOT MASTURBATING,I AM NOT CO-HABITATING,I AM NOT PRACTICING LESBIANISM, I AM NOT BECOMING A WOMAN-PRIEST,I AM GOING TO GET THE CHURCH'S ADVICE WHEN I AM ON MY DEATH BED REGARDING HYDRATION,I AM NOT USING BIRTH CONTROL BECAUSE I AM NOT HAVING SEX/AM NOT MARRIED AND IT IS A MOOT POINT BECAUSE I WILL BE 68 IN JANUARY 2010, NO LONGER IN NEED OF BIRTH CONTROL. WHAT AM I SAYING IN THIS LETTER? I AM ONLY EXPRESSING MY THINKING. IT IS ONLY NATURAL THAT I WISH YOUR THINKING WERE LIKE MINE AND THAT THE CHURCH'S WAY WAS MY WAY.BUT IT IS NOT. POPE BENEDICT.I OBEY. I AM ONLY WANTING CHANGE. BUT BE ALERTED THAT I AM LOYAL TO THE CHURCH'S BELEIFS.WHY THIS LOYALTY? I DO IT AS A PENANCE AND AS A WAY OF REPERATION FOR ALL OF THE MISTAKES OF MY PAST.BUT AGAIN, BEFORE I LEAVE, KNOW THAT I AM A FOUND SHEEP, LOST AND RETURNED, PRACTICING MY CATHOLICISM YOUR WAY.I AM NOT LIBERAL, I AM NOT A FEMINIST, I AM A STRICT CONSERVATIVE. I FOLLOW THE LETTER OF THE LAW BECAUSE FOLLOWING MY LAW LED TO TROUBLE FOR ME AND OTHERS. IF YOU MAKE ANY CHANGES I WILL APPLAUD AND BE HAPPY BUT IN THE MEANTIME, I SAY FIAT TO THE WORD OF THE CHRUCH , AS IT IS.

(the following poem is optional reading)

Now
my wounds, too egotistically putrid to share
are clutched close, neuroticized by time
dinasoured into fossil-eggs
sandblasted/etched/anorexiced
semi abstractly and so secretly
that they can only be admired in the gallery
of my own hungry mind.

Now
my wounds, loosened, colonic-ed
catapulted, ripped terminally
from DNA strands: poisoned, stiff-necked , sour
with the toxic waste of shame
placed on pedestals of pride
are self-viewed as one of a kind-mine

Now
my wounds are soft-coaxed
and angelically mid-wifed to infant dribble
nursing forth, arteried by transparent tubes
an operation of resuscitation, a visitation
performed at horizontal/vertical intersections
during autumn-like, golden light-nights
red to red
my wound to wed the ORIGINAL FIVE WOUNDS
until